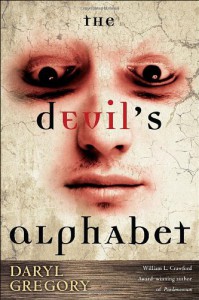 Really interesting concept and fundamental ideas; even better was how the characters used to communicate those ideas were round and interesting as people and not just as capital-i Ideas; even even better was its handling of both East Tennessee and sexualities other than hetero - subjects which I will fully admit are rather close to my heart and thus may be somewhat swaying in my judgement.

However - and this is a big however - the way I feel that I am forced to interpret the ending is complete, total, and utter FAIL on the abortion issue. Right up until the very end, everything's ambiguous and complicated, much like real life even before you broach the book's premise of one of the three new 'strains' of humanity being almost exclusively female and parthenogenic at that. But then the author tacks on a total cop-out ending of, "well, whatever complicated whosiwhatsits we've just done with the plot may turn out as, I like this kid, so surely it's a good thing that this child here and now wasn't aborted," with strong implications of "and therefore everything that was done to assure that this child - and maybe any child? - wasn't aborted was a good thing."

The book raises the really interesting scenario - what do you do when girls start getting immaculately, repeatedly pregnant at twelve or younger - and presents several different characters responding to this scenario in very different ways, but at the very end, I feel like the author just threw up his hands, went, "oh, this is complicated," and threw in the miracle baby so we could all nod thoughtfully over its miraculousness.

I mean, there's all sorts of different questions of agency you're dealing with here - when there's literally nothing a girl or woman does or has done to her in order to cause pregnancy and yet it happens anyway, when this starts happening to very, very young girls, when this starts happening to a certain subset of what used to be humanity and may now be an entirely different species with different, I don't know, standards? People kill and die because of this conflict, and somehow it's all brushed aside with, "wow, isn't this a very special baby boy."

Apparently the ending still vexes me.

One other vexation - the extensive, obsessive descriptions of members of the third strain of 'new humans' - the ones primarily defined by their fatness - creeped me out a little, but this may be my own personal sensitivity. They crossed my personal line of weirdly fetishistic and "look how gross" that I just didn't get from the descriptions of the very tall or very purple strains. It kind of reminded me of the story that Gordie tells in Stand by Me about the pie-eating contest and the descriptions of the fat kid in that. Meh.

All that aside (and that is a lot), I genuinely enjoyed 90% of this book. Even characters that might seem a little stagey and cartoonishy-villany have depth and reason behind them. Lots of interesting stuff thrown against the wall, and a lot of it sticks. Plus, well, it's set in East Tennessee. I had no idea how much I wanted to read about that until I did.

Could have been a four and a half, but now it's hanging onto the three by the skin of its teeth.
Tweet