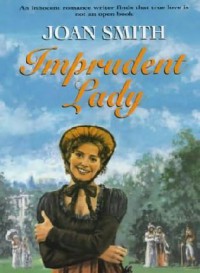 Snappy and charming enough, a slapstick cousin to Austen-style Regencies. I had much sympathy for the bookish, retiring heroine who comes into her own, an innocent who's not afraid to say clever things. Not sure why the author had to be the "but she's not a feminist!" drum, as that seemed a bit slapped on. The hero vacillated between genuinely charming and insufferable/controlling, at least enough that you could get an inkling why the heroine put up with his nonsense. You might question her choice in doing so, but you could see why he appealed to her.

And then there were the comic supporting characters - the overbearing cousin (in no small comparison to Mr. Collins), the unsuitable suitors, etc. Their over-the-topness pulled the book up into deftly-handled froth, instead of just empathizing with the heroine when she shuts the hero down for being awful and/or awfully ridiculous.
Tweet