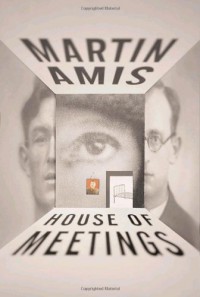 Hm. I think I just may not be cut out for traditional literary fiction, even when there seems to be a ripping good story attached. While there was a very distinctive narrative voice and a lot of the ideological rambling is very much in support of defining who that character is, after a certain point it just feels like authorial wankery more than anything else.

The interesting line with this book is how much of the wanking is the author trying to establish who his narrator is, a self-admitted rapist and murderer, and how much of it is descending into general author commentary. When, in the first thirty pages, the narrator whinges on about how there's been no real examination of the aftereffects of rape on the rapist and how that's not faaaaaaaaaair, yes, that's a crucial bit of information about the narrator. What squicks me is how it is written such that I think we are supposed to take the narrator seriously on this point, if even for a minute.

And so on and so forth for the next two hundred plus pages.

The other thing that left me a bit, "...is this for real?" is the big revelation at the end of the book. When the narrator finally finds out what happened between his brother and his brother's wife in the House of Meetings during their conjugal visit fifty years earlier. The thing that destroyed his brother. The problem was the sex was good and the brother just didn't care. Maybe I'm just not the target audience, but casting this entire tragedy of lives, the entirety of 20th century Russian history to some extent, through the prism of the sexual prowess of two brothers? Are you kidding me? This is totally an "The World Revolves Around My Penis" book, and I just don't give a damn any more.

Points, though, for structure. I found myself the most fascinated by the addressee of the book, the narrator's late-in-life stepdaughter. I thought the book was really well-constructed in how it created this entire relationship and life in the blank spaces around the story being told.

Points, too, to the author for having the balls to come out and say it directly, through the narrator, even - this is really a love story between the two brothers; the women are all excuses or intermediaries.

(Which, yes, that's kind of the point of the book and the narrator, but my god I'm tired of reading Serious Books in which the women are all excuses or substitutes. I think that's why the stepdaughter was so interesting - she was the only female who appeared in the entire book who was not judged solely on her sexual worth. And, of course, the stepdaughter never appeared at all.)

Yes, there are some brilliant turns of phrase. Yes, this was really skillfully constructed. But I'm not interested in literary ideological ponderings so much as I am in storytelling, and it's very clear which was more important in this book.

(Plus I just don't give a damn about the narrator's penis.)
Tweet