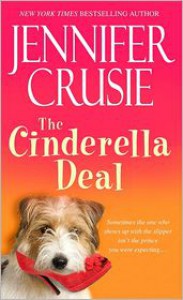 A sadly disappointed five. It's sharp like all of Crusie's novels, and I luuuuuuuuuurve a good pretend-to-be-married plotline, but this one just didn't have the payoff for me. Sure, there were the really good oh-if-only-this-were-real moments, but there seemed to be no transition between "let's just get this over with" to "let's be married forever and ever!"

Mostly, though, my gripe is with the hero and heroine. It's the opposites attract thing, but you don't have to be a stuck-up prig like the hero to be irritated at the herorine's space-cadety-self-righteous-artiness, and you don't have to be an unrestrained-to-the-point-of-impracticality free spirit like the heroine to resent the hero's overblown need for control. The narrative was structured to at least slightly favor the heroine's artsy-fartsy worldview (she loosened up the hero - which was seen as good, but when she got a little less impractical, she went too far and got weird, but the too-far-and-got-weird was not separated from less-impractical, and that was all portrayed as bad. Maybe I'm too stodgy, but it all felt a little one-sided to me, and the book never really addressed that the heroine could be just as controlling and life-absorbing as the hero, just under the guise of being an artiste.
Tweet