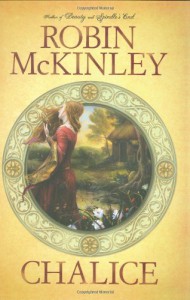 This is a six, six and a half for me. The quality is solid, but it doesn't blow me away. I thoroughly enjoyed it, but it didn't blow me away. McKinley's work is often fairytalesque, even when it's not explicitly playing with a fairy tale, and I think it worked well for this story, even as I found it very distancing from the characters. McKinley makes me realize how important I find dialogue for establishing my relationship with the characters. It's mostly tell, which is the whole fairy tale thing ("Once upon a time, a bunch of stuff happened."), but I'm pretty sure it's a deliberate, playing-with-the-rules sort of thing.

The world-building was fascinating to me, even if it was a little thin in places. The end was a little deus ex machina, not fully explained, now everything's okay, but I appreciate the sense of effort McKinley gives her characters. Even if the result is inexplicable within the rules of the universe as previously established, it doesn't feel unearned. I appreciate that.
Tweet