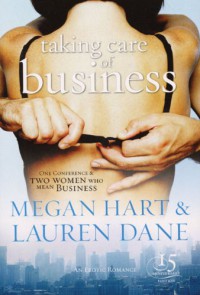 tl;dr version - a hero who mansplains is no hero of mine, but toppy!ladies with willing boys are always a good thing.

We're averaging out three stars, because one of the main plotlines is a total, total four, and the other one barely clings to a two. Hart is consistently good about giving really good structure and meat (not like that...welll, sort of) to her books that are, let's be honest, All About The Sexytimes. We have the Secret Fuckbuddies Becoming More plotline and the Recently Broken-Up Burgeoning Top plotline, all revolving around - wait for the excitement - a three-day conference for a packaging company, involving thrilling! employment law! action! and nondisclosure! severance! agreements! (I am not making this up.) (On the other hand, it's very nice to see resolutely Normal People have the exciting Sexytimes in books, as well as spies/werewolves/hookers on a mission from god/etc.)

My problem with this book, though, is with the hero of the SFBM plotline. For the first quarter to third of the book, where it was mostly just sexual tension between him and the SFBM heroine (and the resolution thereof), I was a-okay with him and them. My problem arose when they found one of my DO NOT WANT buttons and jumped up and down on it. Hard. Repeatedly. And for the rest of the book. I'm sorry, a guy in a professional position of power who's bonking the new girl in town does not get to casually dismiss the new girl's worries about how their relationship might affect her professional reputation as "no big deal." Especially not when they've already gotten caught engaging in a little handjobbery in a public parking lot, and even more especially when getting caught has led to new girl's bosses being told of her "inappropriate relationship." Especially especially especially when the new girl has previously had her professional reptuation ruined because of a completely aboveboard relationship. THAT'S WHY THEY CALL IT A DOUBLE STANDARD, and the dude who is not subjected to it doesn't get to call the shots and have me still interested in reading about his Sexytimes.

Hart actually does a good job of having the SFBM heroine raise all these issues with the SFBM hero, but she still has him brush those aside (with some Sexytimes), with no indication that he's acknowledged the risks she's considering/taking on by being with him, other than an apology he offers that seems sincere but is immediately undercut by his shutting down of anything else she says by initiating Sexytimes. Just...not okay.

And this doesn't even get me started on SFBM hero's total defensiveness about still being emotionally involved with his ex-wife even while trying to hook up with SFBM heroine. He left Sexytimes to go open a pickle jar for the ex-wife and he pulls the "c'mon, baby, we only got caught once and you didn't get fired; I don't understand why you're being such a hysterical woman" bullshit?

However, the story about the lady discovering she's a dom, not a sub, and getting to play with the Jared Padalecki-alike hotel manager is hot like burning and totally worth skipping around the really unfortunate other storyline. Hot. Burning. Etc. Yes. Read that.
Tweet