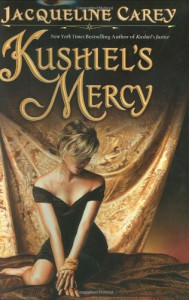 Boy howdy is there a lot going on in this book. For some reason, this one feels even more jam-pakced than even Phedre's shenanigans. Maybe it's because I was reading so quickly at this point that this one almost felt rushed.

I gotta hand it to Carey; the whole brainwashing of just one city plot twist wrapped me around the axle far tighter than expected. The last twenty-five percent of this book was just excruciating (in a, heh, perhaps appropriately good kind of way?), because the subversion of Phedre, Joscelin, Ysandre, and ultimately even Sidonie was just stressful and awful, and Carey pushes things far enough that I wasn't sure she'd stop things in time to prevent civil war. Kudos to her for that.

This book also further cemented my appreciation of Imriel and Sidonie's relationship. In some ways, it feels far more a marriage of equals (so to speak) than Phedre and Joscelin's, and it far outstrips the vast majority of male/female relationships in fantasy novels. Even with Carey's exploration of power exchanges in the bedroom, you are never left with any doubt that Sidonie is just as capable and competent and self-sufficient as Imriel, if not wildly moreso. (In general I think Carey does a better job with female characters than male, but only by a smidge.)

I also love that you are never in any doubt of why Imriel loves Sidonie. There's no reliance on the, "she's just so perfect!" or "she's so strong (offscreen)!" or "it just felt right!", at least to the exclusion of more concrete reasons - her onscreen strength of character, her (demonstrated) cleverness, her (and the list goes on). I love that while this is a Grand, Epic, One For The History Books Love, Complete With Lots Of Sex, this is also a being-delighted-by-sitting-around-doing-the-Terre-D'Ange-equivalent-of-reading-the-newspaper-and-drinking-coffee kind of love. That it's epic in all directions.