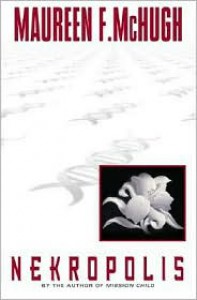 I. Hm. I don't know. This book is very much science fiction, very much not in the style of science fiction, and that's both its strength and weakness. The SF elements are used as constructs for the story, which is all about people. This is good, because I care more about people than I do about technology. This is bad, because I feel like some of those SF elements are not fully thought out (or at least not addressed in the text), because only the ones that have implications for the characters that the author wants to explore are given screen time. However, my delight at reading science fiction set in Morocco is enough to overcome a lot (even as that gives rise to its own host of problems).

So, okay. Near-future society, with two main SF...thingies: 1) the concept of "jessing," in which there's a mental implant to compel loyalty upon pain of sickness, madness, death, taxes, etc, leading to people selling themselves into indentured servitude and 2) the creation of another species(?), the harni, who are 98% genetically identical to human (but that 2% apparently really counts), are created in a lab, and are chattel, not people. Our Heroine has jessed herself, gone and fallen in love (sort of?) with a harni, and has run away, with attendant Bad Things.

I think the harni are handled really, really well in the book, as the author is clearly interested in exploring what this difference in species means and how it plays out, as well as in the status of harni in society (societies). But the jessing? Oooh. I. Hm. I feel like this was pretty much addressed only as much as was necessary to set up some of the familial/societal issues the author wanted to talk about, and a lot of the implications were brushed aside. The important bit was the illness/death that attempting to break the jessing would cause, not the implications of fucking around with your brain/emotions. I was surprised that the illness caused by defying the jess was entirely unrelated to the owner. There didn't seem to be that many emotional/brain repercussions, or at least not ones that were explored.

Additionally, I found the interpersonal/societal issues that this book explores post-jess-defying were, um, very lit-fic. It dealt with issues of honor and familial bonds and poverty and marital relationships
in a Muslim, North African community, with the SF as framework around these very familiar issues. This should be awesome. I should be digging this so hard. ...I didn't really feel like the SF elements were being used to say anything new, except about the harni. Blah blah the son has brought shame on the family blah blah the daughter sells herself because she has no options blah blah the daughter seeks her own happiness at the expense of MOAR SHAME for the family blah blah escape to Europe blah blah diaspora drama blah blah did we mention this new species?

The structure of this novel helped get me over a lot of the blah blah. It's told in alternating first-person chunks, first Our Heroine, then her harni not-quite-lover, then her mother, then her best friend, and then finally one last chunk from her perspective. I very much enjoyed the immediacy of the first person narration from three very different women within the same society (the jessed, shamed young woman, the shamed widow, the 'successful' wife and mother), and I enjoyed seeing how their relationships played out, with all the resentments and pettiness and deep, unswerving loyalty, even over their anger and disgust. I enjoyed how the author gave a face and story to these women, even as I didn't feel like anything particularly new or exciting was being said. Look! It's shame and honor as integral parts of a society that strictly regulates the habits of women, and now we have new and exciting sources of shame! Sigh.

And, okay, here's the big thing - I'm a little uncomfortable with a novel that spends three-quarters of its time heaping horrible things on its heroine because of her position in a Muslim, North African society, only to have the last quarter take her to Europe, where she's immediately granted asylum and welfare and counseling and work, and everything's not perfect - she's still dealing with the aftereffects of the jessing and being not-quite-in-love with a being not really constructed to love her back in a human way and, you know, going from a very closed-in Muslim milieu to Secular And Open Europe - but Spain is pretty much presented as The Answer To Her Problems. I don't know. I was pleased with the complexity of the Morocco portrayed, but Europe As Bureaucratic Panacea rubbed me the wrong way.

A fluid, easy read, one that makes you uncomfortable in a lot of the right places but also a few of the wrong ones.
Tweet