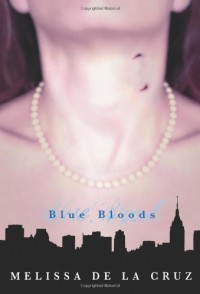 I am painfully, painfully addicted. Not entirely in spite of the trashiness (because a small part of me finds the constant detailed descriptions of everyone's outfit deeply entertaining - hi, Laurell K Hamilton for the Gossip Girl set!), but if you dig beyond the uneven pacing, the telling instead of showing, and the constant! references! to everyone's! extreme! wealth!, there is some very, very interesting mythology being crafted here, with some deeply twisted and intriguing relationships as a result.

spoilers for both this book and Masquerade, the sequel

Let's see - rotating 3rd person POV between three main female characters - Schuyler, our old-money-but-now-broke semi-orphan outcast at Extremely Posh School; Mimi, our old-money-and-new-money-and-unbelievably-rich popular girl who is The Queen Bee everywhere and not just at EPS; and Blair, old-money-with-a-new-money-stepmother recent transplant to EPS from Texas who is absorbed into Mimi's social circle but feels an outsider. We've got the three different ends of the EPS social spectrum, but really? EPS is almost irrelevant to this story.

Yes, they're all vampires. Yes, fifteen to twenty-one is when they come into their vampirehood. Yes, being a vampire makes them fast, strong, beautiful, etc etc etc, and they're not allergic to sun. Blah blah standard vampirecakes blah blah.

Here's where the mythology gets interesting. Initially, it's just that vampires are souls that exist beyond the mortal shell, and the Turning Age is when the vampires first start remembering their past lives (and incidentally needing to drink blood, but whatever, that is, like, sooooo irrelevant). So, like, really Old Money. The current crop of characters came over on the Mayflower.

That's all well enough, certainly an interesting twist, but what I like about it even more is that de la Cruz takes it one step further: the vampires' original souls? Angels. Cast down to the mortal sphere, not hell, when they followed Lucifer. So layer on all sorts of Biblically-inspired angel/demon stuff, too.

See? Intriguing. More than your normal teen vampire book. What make it even more deliciously awesome is the bonds and relationships that de la Cruz has set up among the angels/vampires/teens all inhabiting one body.

Mimi is soul-bonded to Jack, who in this lifetime is her twin brother. You start to realize something hinky is up when Mimi starts having memories of Jack as her groom at various weddings throughout the ages. And the way it's played, I think you're kind of supposed to root for Mimi and Jack to get together. Yes, Jack is also drawn to Schuyler, our ostensible heroine, and it turns out that he's been drawn to other women (notably Schuyler's mother) throughout the ages, but he keeps coming back to Mimi. He is Mimi's one - I was going to say "humanizing point," but that's not quite right - saving grace, and the only times Mimi is not being almost entirely repulsive is when she's thinking about how much she loves Jack.

Schuyler's mother is soul-bonded to Jack and Mimi's father, who in this instance is her brother, and the reason there has been this great schism between them is because Schuyler's mom left Charles for a human and had the affront to not only marry a human but get knocked up by one (i.e. Schuyler). And then! In the closing pages of Masquerade, somewhere in all that, she may have had time to get knocked up by Blair's dad, producing Blair!

Because, see, Schuyler's mom is Gabriel(le), and Jack and Mimi's dad is Michael, and they are the only two Untainted, or whatever - angels who voluntarily fell in order to stay with their parents, an angel I'm not familiar with and the Metatron! (Now I picture Schuyler's grandfather as Alan Rickman. This is not a bad thing.)

And then, of course, there's the Red Blood/Blue Blood relationship thing. The metaphor of drinking blood = sex is a little heavy-handed (Mimi is precocious, starts drinking early, and drinks around a lot), but the mythology is set up so that it's a meaningful thing, that Blue Bloods are bonded to those from whom they drink, and it is forbidden (not to mention in extremely poor taste) to drain one dry to the point of death.

Then there are the, I can't remember what they're called, but essentially they're Watchers. Families trained to serve as "left-hand men" (I'm not sure if that was a deliberate fumble on de la Cruz's part or not) of the Blue Bloods, and of course Schuyler has a (male) Red Blood Watcher who has been trained since birth to serve her, who's been her best friend forever, and who she's now noticing is pretty cute, as well as tasty-looking. (Naturally, Oliver, her Watcher, comes from a filthily rich family.) You're not supposed to drink from your Watcher, but exigent circumstances (sort of) demand that Schuyler drink from Oliver, which completely changes their relationship, as well as being kind of forbidden and naughty.

What photo shoot? Ah, yes, the slightly ridiculous subplot of Schuyler and Blair getting chosen to be models for this one fashion company owned by a fellow Blue Blood ('cause they're all rich and gorgeous, see, and wildly successful), which makes Mimi violently jealous, because she's the It Girl and the only one allowed to have a semi-naked billboard in Times Square, gosh.

Yes. It is that ridiculous. Mimi loves nothing better than to deny people pleasure, to let them know that they are excluded from something to which she is included. She likes it that people hate her.

So there's the Mimi-Jack-Schuyler-Oliver love...rhombus going on, plus you add in the fact that Schuyler has some of her mother in her, who previously tempted Jack and is Jack's father's sister/soul bond, and many of these kids are older souls than their parents and they're just starting to remember this, and there's questions of divinity and all sorts of delicious, juicy mythology to delve into, and it's an addictive combination. For those reasons, I highly recommend these books.

I just really, really wish we'd stop getting a brand list of every. single. outfit. and room. for every. single. character. The Gossip Girl-y bits, the constant harping on everyone's wealth, the constant heavy-handed classicism (which is interesting and would be even more so if it weren't constantly played as merely a vehicle for these characters to be able to advance the plot, like fly to Venice on short notice, or as a way to show off the author's knowledge of what's hot and What The Rich People Like) - these are the parts that grate.

Mostly it feels like a writer's weakness, an inability to manage the different parts of her story, to blend them into a seamless whole. (Isn't the point of Old Money that you don't actually talk about Money?) It feels like the author trying to show off what she knows about Rich And/Or Famous People, rather than develop the characters in any meaningful way. A little name-dropping or a little coy lack-of-name-dropping would have gone a long way towards sketching the characters, but instead it comes off a little self-aggrandizing and trying too hard. (Not unlike Blair’s tacky stepmother…)

There is a strong weakness of telling and not showing; a lot of action happens offscreen or is so impenetrable that it really does take Captain Exposition showing up two scenes later to let you know what it is that just happened. This is a much stronger failing in Blue Bloods than in Masquerade, and I have even higher hopes for the next book. The characters start out as pure caricature, and maybe I’m projecting too much onto them, but I really think they grow by Masquerade into something much more believable and much less pastiche.

There are some kickass world-building and relationships set up here, accompanied by weak storytelling and often shoddy character development. It wants to be so much more than it is, and I believe that de la Cruz has the raw creativity to make it happen, but she keeps getting held back by lack of craft (which I think could be remedied by more practice and a really hand-holdy editor) and the tendency to rely on tropes of all the teen books about rich, bitchy girls and their fabulous, empty lives, etc. that have taken over the teen aisle at Target. These characters are interesting because they’re not empty, that they have a larger purpose and a larger life beyond who’s carrying what handbag, so when de la Cruz resorts to the style of character-development-through-accessories, it’s a huge letdown.