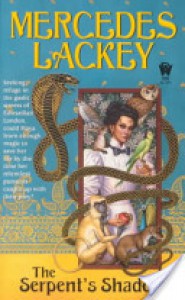 Goddammit. If I end up reading this entire freaking series just because of the Wimsey homage character, I swear I will....not be surprised.

Okay, so, there's an egregious amount of dialect, and the handling of Hinduism is maaaaaaaaybe a step and a half above Temple of Doom, and the author is clearly v. proud of how she's handling issues of race in Edwardian England with a heroine whose mother was Indian, and while you're totally aware she's tanking it most of the time, you don't realize how much she's tanking it until you read the passage about suffragettes, which is actually pretty decent, and oh my god, are we not even going to vaguely address the fact that the villain might, you know, have some legitimate grievances against the British in India, even if she is batshit crazy? No? Not really? Oh. Okay then.

The romance is a little half-hearted, and the fairy tale pastiche doesn't work nearly as well for me as The Fire Rose did (which is a guilty pleasure re-read of mine), and even the magic isn't all that magic-y for me, but DID YOU SEE THAT THERE'S A NOT-TERRIBLE WIMSEY HOMAGE? Because there is. And he's not terrible. And I'm going to end up reading the entire damn series just to watch him swan onstage every couple of chapters, say something pithy, solve someone's problems, then swan back off. Hey, I recognize my weaknesses.
Tweet